Most Common Questions About Cervical Mucus

Cervical mucus provides fascinating fertility insights. But, where can you learn about the nitty gritty details of cervical mucus and factors involved? In this article, we take an in depth look at all of your curiosities pertaining to cervical mucus, beyond basic qualitative observations. Stay tuned for part two, where we explore challenges that can arise regarding cervical mucus.

10-year Creighton user with a passion for women's health, family, and writing.

Mucus. Not a particularly pretty word, is it? Certainly not the type of thing you’d want to discuss with just anyone.

But alas, cervical mucus—also known as cervical fluid—is an essential indicator of where you are in your reproductive cycle at any given time. Understanding what your mucus tells you is a crucial part of understanding your fertility—and by learning how to interpret it, you can have a better grasp of how your body naturally functions, the best days to have intercourse if you want to get pregnant, and your overall health and wellness.

We’ve covered this a bit before here on the kegg blog—and, as you know, kegg is a fertility tracker that helps take the guesswork out of interpreting fertile mucus for you. For a little background info, check out this post: Cervical Fluid 101. All caught up? Then let’s take a deeper dive. Here are some of the most common, most awkward questions about cervical mucus, answered—so you don’t have to ask anywhere else.

What is cervical mucus and why should I care about it?

Produced by—you guessed it—your cervix, cervical mucus changes throughout your cycle. When you aren’t fertile, mucus is thick enough to create a cervical plug that protects your uterus. Most often, you won’t see any cervical mucus externally during these infertile phases of your cycle.

However, in the days leading up to ovulation, this mucus changes. As the fertile window opens, mucus becomes more abundant, thinner, and alkaline, to create a more hospitable environment for conception. It assists in lubricating your vagina for intercourse, reduces pH in the reproductive tract (so sperm isn’t immediately killed by the acidity), and even provides nutrients to feed spermatozoa.

This means that evaluating your cervical mucus will help you understand your fertility status at the moment—and see whether your body is cycling in a healthy way month after month.

What basic qualities indicate how fertile my cervical mucus is on a given day?

If you’re visually checking your cervical mucus each day, discerning a few key characteristics will help you understand what level of fertility it indicates.

It should be noted that there are several detailed, well-studied methods you can use to help you define these observations consistently and accurately enough to practice fertility awareness or natural family planning. Learn more here if you’re interested in exploring these options. For now, we’ll just get into the basics.

Generally speaking, take note of the color/transparency, consistency, and feel of your mucus each time you make an observation.

If the mucus is white or opaque; sticky or watery; and feels creamy, smooth, or even just dry, it’s on the less fertile side of the spectrum. This mucus is often described as “pasty,” with a consistency almost like hand lotion. It can signal the start of hormone shifts but does not indicate peak fertility.

If the mucus is crystal clear; stretchy and elastic; and extremely slippery, it’s on the highly fertile side of the spectrum. You might hear this called “egg white cervical mucus,” or EWCM, and it generally appears when fertility is highest—right before, or even during, ovulation.

During your cycle, you’ll likely notice mucus on both sides of this spectrum—and anywhere in between—as your body moves from infertility to fertility, and back again.

Of course, your kegg assesses the fertility of your cervical mucus for you by measuring its electrolyte levels in your daily readings. This data is highly accurate, objective, and scientific, so it’s a great way to understand your fertile window without any guessing involved.

How do I observe cervical mucus?

You can pursue one of the methods mentioned above to get really detailed observations in and chart consistently, or you can simply be mindful of what you see as you go about your day. When checking for mucus, gently wipe with toilet tissue before and after using the restroom to see if you can pick up any cervical fluid. Alternatively, some women choose to check internally by inserting a finger into the vagina. (If you do choose to use a formal method, it will include instructions on a preferred way to make observations.)

You’ll want to do this several times a day—preferably every time you use the bathroom—to make sure you don’t miss anything, as mucus patterns can change from moment to moment.

Is learning to chart your cervical mucus time consuming?

Women trying to conceive often stumble upon this method of charting but feel frustrated that it requires a learning period (read: time!). To reduce frustration and provide more objective feedback, many women turn to kegg, which uses once daily readings to formulate its fertility window predictions. With kegg women do not need to track their cervical mucus observations, although many users enjoy both sources of information.

For kegg charting, you’ll insert the device once a day, during a consistent two-hour window, and leave it in for less than two minutes.

It will take a reading of your cervical fluid and send that data to the app on your phone to help you understand its fertility implications. 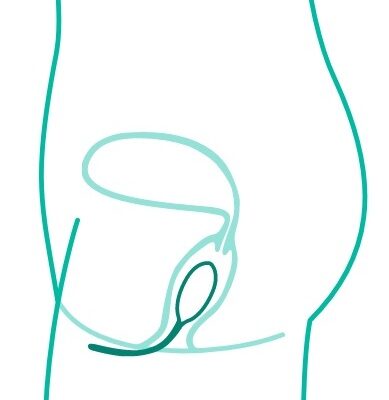 Is tracking my cervical mucus hygienic?

Yes. Your vagina is self-cleaning and you aren’t likely to do any harm by checking for mucus as long as you’re following basic best practices for hygiene. That means washing your hands before and after, wiping from the front (urethra) to the back (anus), and using clean tissue every time.

Is there a difference between cervical mucus and vaginal discharge?

Yes, there definitely is! Cervical mucus is produced by the cervix in response to hormone changes that happen throughout your reproductive cycle. Individual women may observe these changes in different quantities or amounts, but overall, fertile cervical mucus has pretty universal observable qualities.

On the other hand, vaginal discharge is produced by the walls of your vagina. It may be present at all times, no matter what your ovaries are doing, to keep the vagina clean and safe from potential infection. The vagina is also responsible for producing the clear, slippery arousal fluid that aids in lubrication during sex. (Pro tip: If you’re not feeling much natural lubrication for intercourse, try drinking more water—hydration helps everything!—and going slower. Sometimes it takes time for your body to produce enough!)

Vaginal discharge may also change if an infection is present. For instance, an excess of milky or clumpy discharge—ick-factor alert: sometimes it resembles cottage cheese—or discharge with a yellow or green tinge can indicate an infection of some kind. Consult your doctor if you’re noticing these symptoms, especially if they’re accompanied by painful intercourse, itchiness, or burning when you pee.

One other color to note: Brown discharge indicates old blood. You might notice it for a day or two around your period, after rougher sex, or occasionally around ovulation, which can be normal. But if you see a lot of it throughout your cycle, it may be worth investigating with the help of a doctor.

How do I tell the difference between cervical mucus and leftover seminal fluid?

If you’ve gotten this far and you’re sexually active, you may have observed that the discharge you see after sex can resemble cervical mucus—especially EWCM. This can make observations tricky, because the fluids really are similar! It takes some practice to identify the differences, but some helpful questions to ask include:

For easier mucus observations as well as better health overall, make sure you use the restroom within 30 to 60 minutes after intercourse. You should urinate to expel any bacteria that may have been introduced to your urethra to prevent UTIs, and you can use kegels or bear down to expel excess fluids from your vagina and minimize confusion in your mucus observations after the fact. (Because sperm makes its way into the reproductive tract within minutes of ejaculation, expelling leftover fluids after sex shouldn’t hurt your odds of conceiving if you’re trying to make a baby!)

And remember: If you’re charting with a kegg, be sure to take your reading at least eight hours after intercourse to ensure accurate readings.

I sometimes notice discharge in my underwear that looks much different than what I see when intentionally checking for cervical mucus. Which observation is more accurate?

When it comes to fertility tracking, always go by the “fresh” observations of cervical mucus. This might include some physical sensations you notice as you go about your day (wetness, slipperiness, dryness), what you see if you’re monitoring your cervical position or using other internal checks, and what you observe on the toilet paper when you wipe while using the restroom.

What you see on your underwear is either vaginal discharge (i.e., not cervical mucus, and not relevant to your fertility), or is so altered by the change of environment and dry air that its characteristics have changed drastically. In that case, you can’t make a good qualitative evaluation of it anymore, so it’s better to disregard and focus on the fresh stuff.

Cervical mucus provides a window into your fertility. Even if you do not choose to track your cervical mucus, having a background knowledge about cervical mucus is empowering as you get to learn your body and its unique features. And hey, you never know when you might be faced with a trivia question about cervical fluid!

In our next article – ‘All Your Awkward Questions About Cervical Mucus, Answered’ – we will dive into some of the more challenging observations seen when tracking cervical mucus, from illness to lack of cervical mucus. Stay tuned!