More Bundles of Joy Thanks to kegg

Spring is in the air, and we are excited to share the news of some sweet new babies that will be coming later this year. While there can be many similarities on the path to motherhood, no two trying to conceive journeys are the same. We are elated to hear these mamas’ stories and celebrate their joyful news. 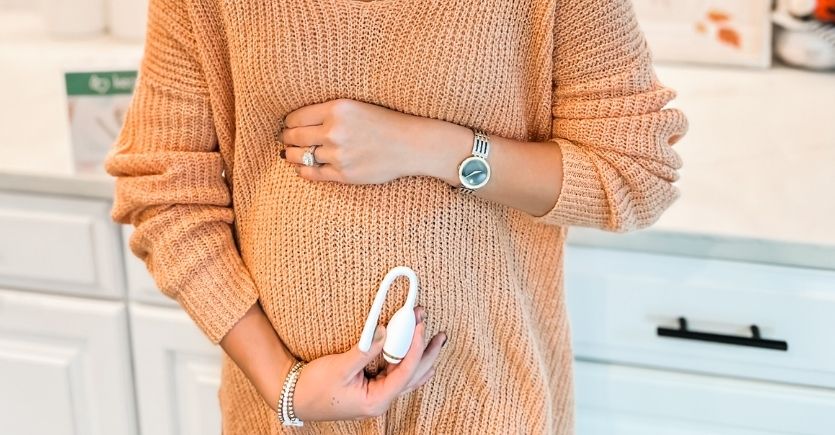 How does kegg help users who are trying to conceive?

kegg’s primary job is to predict the fertile window, the time in which pregnancy may result from sex/insemination. Kegg helps the user in two ways: first, the user sees the advanced prediction of when kegg predicts that fertile window will most likely occur. Secondly, the user sees the daily trend of readings. A downward descent in readings is a good indication the user is entering the fertile window. This decline usually indicates that the hormone estrogen is rising and the cervical fluid is becoming more fertile, or hospitable to sperm. As a result, the kegg user will confidently know when to time their trying to conceive efforts.

This mama has been a longtime kegg user who originally used kegg to track her cycles before shifting to trying to conceive. She shared “I originally purchased kegg as an indiegogo supporter because I enjoy trying out new fertility tech. I am a Fertility Awareness user and originally was avoiding pregnancy when I purchased Kegg. [Note: kegg is not recommended to be used for trying to avoid.]  I had over a year’s worth of cycles with kegg before I switched to not preventing/not trying and the majority of the time it has lined up really well with my own CM observations and Basal Body Temperature. I was surprised it took a few cycles to conceive and actually found kegg really reassuring when my CM became harder to interpret due to so much unprotected sex…I’m excited to announce we officially have #4 on the way and can’t wait to see what’s in store for the future.”

Interestingly, this user had an atypical fertile window this cycle. Her true fertile window occurred during kegg’s predicted fertile window, however she did not experience the classic dip during this time. She timed intercourse during this window and confirmed ovulation with a temperature shift in her BBT on cycle day 18. Several days later she shared that she had received her positive pregnancy test (her BFP!).

This second mama was ready to get pregnant with baby number 2. However, after a trying journey to conceive her first, she knew she needed something different to help her conceive her next child which is how she discovered kegg.

“I am 34 with PCOS and I was using kegg to conceive my second child naturally. My first child was conceived after 3 years of trying, on our second try with fertility medication and I was hoping to avoid that this time. I know our main issue was timing and with OPK’s I would get false positives so I searched for a different way and I came across kegg. I often had a hard time reading my own cervical mucus so I thought kegg would be great. I ordered it shortly before I found out that I did not get pregnant on our first cycle trying. I started using it on my second cycle. After going into a descent [in kegg readings] around cycle day 14, I did a Proov PDG test 7 days later to confirm and I did not ovulate yet. I kept doing my daily readings until I went into another descent around cycle day 25. My basal body temperature, my opk tests and my kegg readings all lined up and pointed to ovulation happening. A week later, I took a Proov test and confirmed, finally, I ovulated! With the help of kegg I was able to determine even on my first cycle when I was in my fertile window. Without kegg, it would have basically been a shot in the dark. I would have never known I ovulated so late. Shortly after we tried that cycle, I had a doctor’s appointment where they told me I would most likely need the help of a Reproductive Endocrinologist to conceive again. However, to my utter shock, I took a test a few days later and I was pregnant! I truly feel like kegg is a wonderful device and without it, maybe I would’ve needed a Reproductive Endocrinologist but we did use it and we conceived naturally and I am so over the moon and so grateful for this product! I just had my 7 week sonogram and saw the heartbeat. Thank you kegg, I can’t thank you enough! We are so overjoyed.”

As this mama described, she had a dip earlier in her cycle which turned out to not be a successful ovulation. She continued to watch for a descent and again times intercourse during this valley (cycle days 20-25).

Of note, kegg has not been clinically tested on women with PCOS. This mama recognized that she ovulated independently but had difficulty knowing when her fertile window would occur due to cycle irregularity. She opted to add kegg to her tracking to watch for the downward trend to be an indication of her fertile window. Learn more how women with PCOS get pregnant with kegg.

This third mama was looking for a cost effective way to help her know when she was in her fertile window which is how she discovered kegg. She shared “I got kegg cause I wanted something that wasn’t gonna cost me money on a month to month basis. After having a miscarriage I knew I wanted to try to get pregnant again right way so I decided to start tracking. I used kegg for 4 cycles when I got my BFP. If it wasn’t for kegg I wouldn’t have known that 4th cycle I ovulated later than usual. Between kegg and tracking LH and BBT I was able to time everything correctly to get my BFP. Now I’m just hoping for a sticky baby and a healthy pregnancy. I would definitely recommend kegg to anyone looking to try and conceive. It was a God send to me to have come across it on Facebook. It’s simple to use. Takes only a few minutes everyday but if you’re like me remember to set an alarm so you remember to take a reading about the same time daily. If you have any questions, reach out on the Facebook page. They are very helpful. You won’t be disappointed.”

This mama’s descent began on cycle day 14. This cycle exemplifies just how individual kegg charts are. Note how she has dips and bumps in her luteal phase. This is normal and common!

At kegg, we are on this journey with you. We celebrate your happy news and hold space in our hearts for those who have experienced loss and those who have not yet received their BFP. Wishing you the best on your kegg journey.

Did you know we have a Facebook Community? Join us for support and community on your fertility journey.