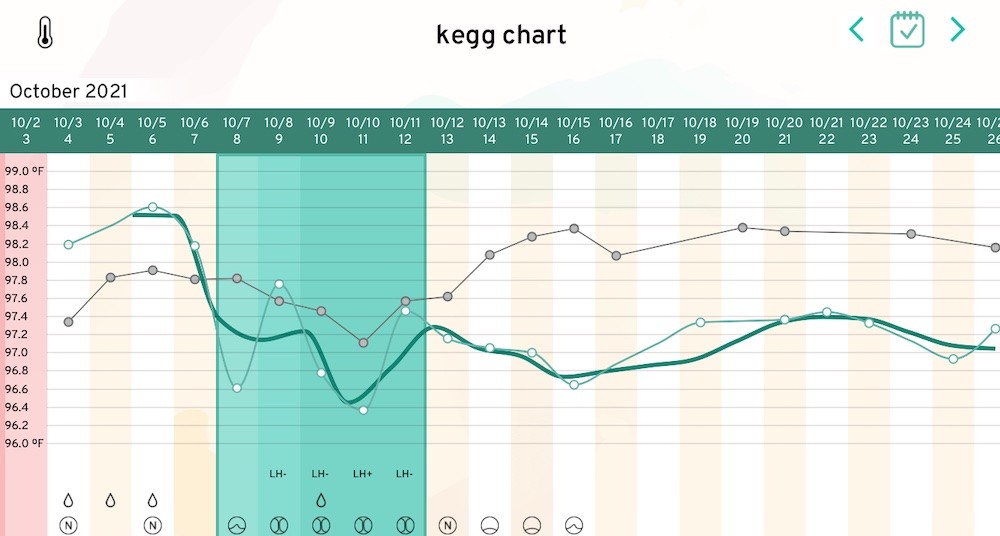 At kegg, we strive to help ensure you understand what your kegg data is telling you. After all, we designed kegg to help empower women with information about their fertility and body.  Since cycle variations are quite common, we have created a summary of the most common abnormal cycle charts. It is important to note kegg can’t diagnose health conditions but instead provide valuable insights about your cycle trends. If you are having trouble identifying a fertile valley pattern on your kegg data, take a deeper look. As always, if you suspect you have a medical condition, please consult your physician.

Start with the Basics

If you are having difficulty discerning a fertile valley, it is important to ensure that your readings are not being impacted by outside influences, as these could dramatically impact your kegg data! The following factors can influence your readings:

If one of the above factors is not playing a role in your kegg data, you might want to consider your typical cycle. Do you have a regular cycle? Do you get your period regularly? Have you confirmed that you ovulate on your own, by blood, urine PdG, or ultrasound? Does your cycle length vary greatly? While LH testing can suggest impending ovulation, it does not confirm that ovulation will happen, and it is possible to have LH surges without ovulation. kegg detects the electrolytes that shift with the hormonal fluctuations of the cycle. In order to see the fertile window, your body does need to progress through these hormonal fluctuations which result in ovulation.

Feeling overwhelmed? We are here to help. Remember, knowledge is power! Kegg cannot diagnose any disorder OR confirm ovulation. However, you may share your concerns and kegg data with your healthcare provider if you feel you may have a cycle irregularity impacting your fertility and health.

By now, you are probably quite familiar with the typical “fertile valley”, but let’s review! The kegg readings are displayed on the kegg chart and reflect the composite electrolyte reading. As estrogen begins to rise and the body prepares to ovulate, the electrolytes in the cervical fluid shift. This change in the composition of electrolytes in the cervical fluid results in a downward trend in readings on the kegg chart, and is associated with a higher likelihood of fertility. After ovulation, as progesterone rises, there is yet another change in the cervical fluid’s electrolyte composition, resulting in a rise in kegg readings. Overall, this creates a “valley” over the course of the fertile window. While kegg predicts the fertile window in advance, kegg users also watch their daily trend data to identify when the fertile valley is opening. When you begin to see a decline in kegg readings, you can suspect you are entering your fertile valley.

Looking specifically at this kegg chart, observe the descent that falls within the first portion of the predicted green fertile window. Once the reading begins to rise on the last day of the fertile window, the user can suspect she may have ovulated the day of the rise or the day before the rise. After this rise, there are many variations of normal throughout the luteal phase. Readings do not need to necessarily remain elevated. There is not one specific trend pattern associated with pregnancy.

Most women typically experience 1-2 anovulatory cycles a year, or cycles in which ovulation does not occur. While not uncommon, it may be surprising if your period is later than expected, or you are not seeing a classic trend. However, by tracking your cycles with kegg, you may have the insights to expect variations in your cycle length by looking at your kegg readings.

The user in the chart below confirmed that her cycle was anovulatory by testing the urine metabolite PdG and getting a negative result consistent with her baseline throughout her cycle. Anovulation can present in many different ways and this is merely one example.

While she does slowly trend downward towards the end of her cycle, she does not experience a classic valley during or near her predicted fertile window. It is possible that she had an estrogen surge and her body prepared to ovulate but was not successful.

While kegg has not been clinically tested on women with PCOS, however many of our users with PCOS elect to use kegg anyway. We have had many kegg users with PCOS graciously share their kegg charts with us.

Although PCOS is prevalent, impacting about 5-10% of women, the presentation varies greatly. While some women with PCOS do not cycle regularly (that is, they do not experience periods and do not ovulate on their own) others may have regular cycles with consistent ovulation. Other women may fall somewhere in the middle with inconsistent ovulation and at times, lengthy cycles. Given the variation in cycle presentation, it is not surprising that the kegg data varies greatly.

Some women with PCOS have observed what appears to be multiple fertile valleys in their kegg data. In this example the user had sex on days with lower readings.  The descents suggest estrogen is high and ovulation could be soon.  A few days after her first valley and rise she found her trend line dropping again and decided to have sex on those days too just in case her first valley wasn’t succsessful in achieving ovulationl. This was followed by an 11 day luteal phase.  Her typical luteal phase is 11-12 days.  If the first valley had been successful, her period would have come much sooner near cycle day 29

A hallmark feature of PCOS is multiple or sustained LH surges.  This user displays a common PCOS occurrence of an unsuccessful LH surge earlier in the cycle. Note the two “dips” or valleys and the two positive LH test results, on CD 16-17 and CD 31.

Another common occurrence for women with PCOS is many days in a row with positive LH results.  Without serum hormone testing and ultrasounds throughout the cycle, we cannot confirm when or even IF ovulation took place. In the chart below, you will notice this user had several days of a positive LH result. Her kegg results helped guide her, as she noted her readings continuing to descend, followed by a rise. She then had a typical 12 day luteal phase.

Yet another finding for PCOS users is somewhat erratic day to day readings. This can be true for users who do not have PCOS too and can often be helped by being more consistent with the measurement time. As you will see there is no obvious fertile window valley.

A final pattern we have seen in some users with PCOS is very low and flat kegg data.  Some users that have experienced “flat” kegg reading will have some very flat cycles and other cycles with more typical patterns. This cycle was likely anovulatory but not confirmed with progesterone testing or ultrasound.

Despite our greatest efforts, stress impacts us all from time to time. Even situations we may not perceive as stressful, such as traveling, can impact our cycle, typically by delaying ovulation. From a primitive standpoint, periods of high stress may cause the body to focus efforts on survival instead of conception.

The fertile window prediction is primarily based on previous kegg cycle data. While it makes its “best guess”, the kegg algorithm does not get the memo that you may be under significant stress. Fortunately, the daily readings are always real-time, allowing you to watch for the descending values which suggest you are in your fertile window.

One of our team members typically has clockwork cycles but in this cycle, she had a minor head cold during her predicted fertile window which delayed her fertile valley by a few days. 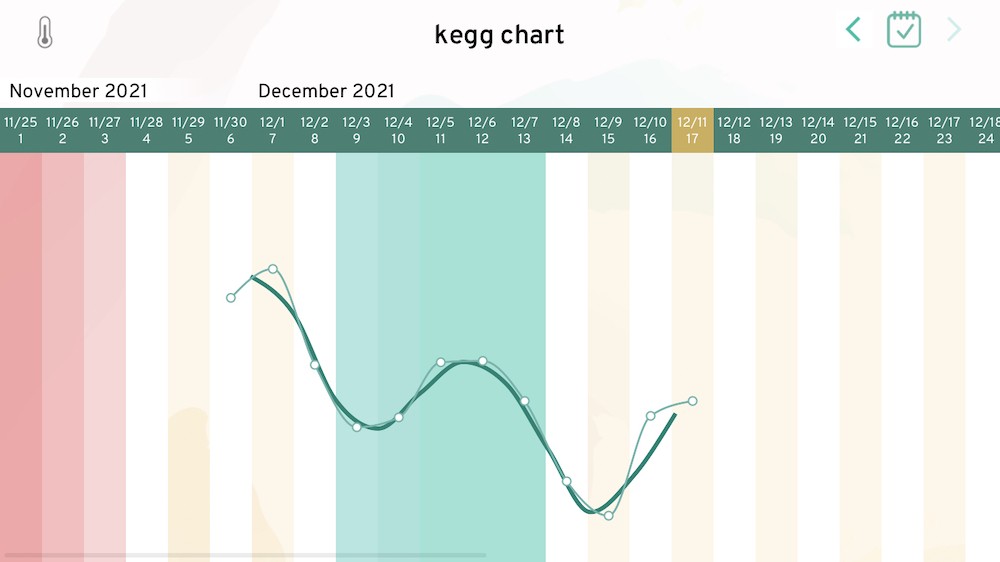 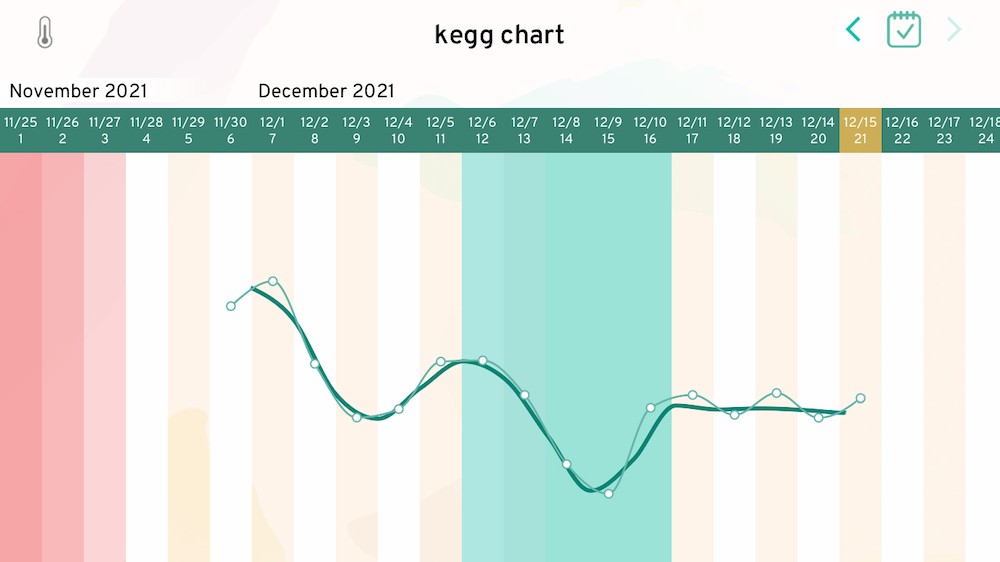 While your kegg data will vary cycle to cycle, you may begin to notice some commonalities between your cycles that will help cue you into the complex orchestration of hormones taking place in your body. If you are struggling to conceive and suspect you may have a problem impacting your fertility, consider speaking to your provider regarding your concerns. If you want to learn how kegg users with PCOS are getting pregnant visit this page.